Per Issue
By Search 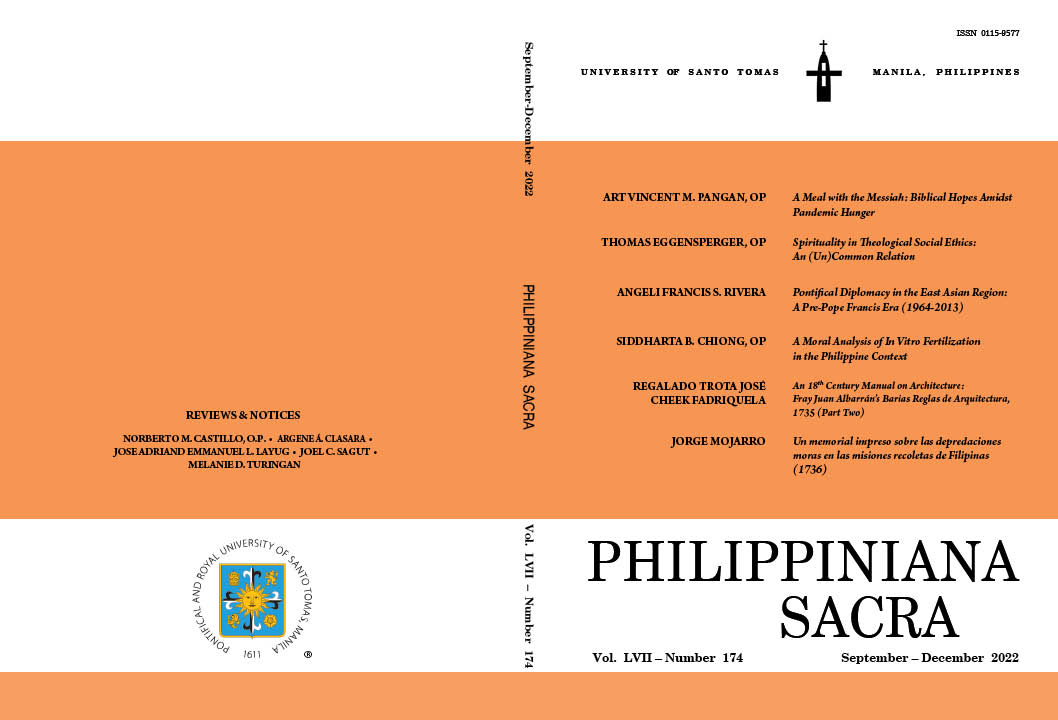 Find Article by Search
Search an article by using any combination of the fields below:

A Meal with the Messiah: Biblical Hopes Amidst Pandemic Hunger

Abstract :
In this short work, the author asks “Why is salvation imagined in the bible as a meal with the Messiah?” The biblical imagination of a messianic banquet must have been developed by inspired but hungry people and then read and handed on from generation to generation by hungry people who were inspired by them. As the pandemic worsened world hunger, this work accompanies the reader in a biblical reflection on hunger and fullness from the Old Testament to the New.

Abstract :
Theological Social Ethics is an established scientific discipline. During the height of scholasticism at the latest, it implicitly plays a fundamental role in the theological debate of ethical issues. This also applies to places where it was not explicitly named social ethics. In the disputes about the social developments during the Industrial Age and following specific “Catholic Social Teachings” in the late 19th century, the (social ethical) Christian teaching of society was decoupled from the (individual- orientated ethical) moral theology. The former became an independent subject, today commonly labelled social ethics. Scientifictheoretical, hermeneutical and social thought of Communio has become the subject ‘Christian Theology.’ Primarily, man remains related to the communication with God and understands himself as capable of a successful, two-way communication to and then, finally, from Him which through hope transcends all times. This ‘roundabout communication’ toone’s neighbour via and from a community with God should be the distinctive Christian element when Christians talk about communion. The topic spirituality arrived in theology at the beginning of the 20th century. Since then, a wide-ranging reflection has unfolded on the inter-relationship between spirituality and theology. However, it comes as a surprise that the relation between spirituality and theological social ethics has not yet been made the subject of discussions. The following contribution, with due humbleness, tries to show up this relation. It starts off from the premise that neither theological social ethics without spiritual impetus nor spirituality without social references do make sense. The fact that spirituality leads to positive effects in a community is commonly assumed in the world of jobs and work and respectively received. At first, it is explicated what kind of spirituality is to be enacted appropriately if it is to be connected with social ethics. Thereafter, social ethics is also defined meaningfully to finally venture an outlook on the two aspects.

Abstract :
This article is a humble venture into the pontifical diplomacy of the Vatican II popes Paul VI, John Paul II, and Benedict XVI, and how their diplomatic styles consistently upheld the nature and mission of the Holy See with the ideals of the Vatican II Council. Through pontifical diplomacy, the Holy See rightly exercises the Church’s prophetic office. The author used text-based and author-based analyses to decode and interpret the Addresses to the Diplomatic Corps Accredited to the Holy See of Paul VI, John Paul II, and Benedict XVI from 1968-2012. The author finds that major political events in the East Asian region have formed each papal style. Paul VI established the foundations of modern pontifical diplomacy by tapping on bilateral and multilateral diplomacies’ potentials. John Paul II used the same platforms to appeal and conscienticize states and institutions to respect the primacy of the human person and to trust the universal and moral foundations of diplomacy. For his part, Benedict XVI focused on truth against moral relativism and dedicated it to the path of openness, forgiveness, and new energies. These unique papal styles are also found to influence Pope Francis’ Culture of Encounter (COE).

A Moral Analysis of In Vitro Fertilization in the Philippine Context

Abstract :
This paper analyzes the moral issues of in vitro fertilization in the context of the Philippines by first unpacking the socio-cultural factors that may influence Filipino couples to avail themselves of IVF. The paper then analyzes the moral merits of the Guidelines on the Ethics and Practice of Assisted Reproductive Technology and Intrauterine Insemination in the Philippines in the light of the Catholic tradition. This analysis will give an overview of how doctors practice IVF specifically in the Philippines. The paper then presents three moral objections to the practice of IVF. Finally, some Filipino virtues are offered as cultural resources that may help infertile couples in bearing the cross of infertility. This paper hopes to contribute to the scarce resources that tackle this issue from the Filipino perspective since most bioethical papers are limited to the Western perspective.

Abstract :
The building of the Santo Niño church is a benchmark event for the study of Philippine architectural history. Apart from the happy fact that this building still stands, are two narratives written by its builder, Fray Juan Albarrán. This Augustinian was assigned as prior to the Cebu convent for two terms, 1735-1737, and 1737-1740. During this time, he planned, oversaw, and completed the rebuilding of the Santo Niño church. His narratives, “Advertencias para obras que se puedan ofrecer en este Convento” (Words of advice for projects that can be offered in this convento”) and “Barias Reglas de Arquitectura” (Various Rules for Architecture) were written between 1735 and the first half of 1736. These texts, which document Albarrán’s experiences in the very early building stages of the church, are perhaps the earliest materials we have to a manual for construction in Spanish colonial Philippines.